Skip to content
My husband and I eat a lot of eggs. Correction: my husband eats a lot of eggs, and since I’m hugely influenced by peer pressure, I end up eating eggs with him. Boiled, fried, in stews and plain, my man loves his protein. And I love him.
There’s only one problem – he boils a dozen eggs at a time and then puts them back in the egg container so that they’re ready to grab when he’s on the go. I’d never thought about doing this before, so you can imagine my shock when I went to make him cupcakes as a thank-you for house sitting for me while I was on vacation last year, and the first egg I broke… was boiled.
Huh?!?!
I figured it was some sort of fluke from the egg manufacturing company, so I cracked a second. No dice. Boiled too. I went through and systematically broke every egg in my egg carton, and NONE were breakable.
Mr. Right never warned me about this little quirk of his. I quickly learned my lesson, but since we got married and he moved in, it has become a game… how do I decipher the cooking eggs from the batch of boiled ones? I try tapping them, shaking them, and to no avail – I’m never right. I closely examine the carton for some sort of labeling… and nothing.
And then I complain to my husband, and he shows me the very clear labeling he did on the INSIDE of the carton. 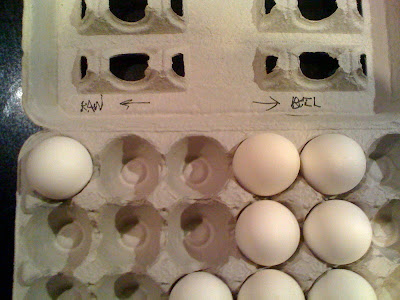 But when you’re a super stealth cook like me, you don’t bother to pull out the container of eggs and examine the INSIDE of the carton for the labeling. You just reach your hand in and hope for the best.
Maybe it’s the difference between men and women. Or maybe it’s because I’m usually in a hurry.
We’ve now worked up a compromise – he labels every square inch of our egg carton, and most of the time I am able to figure out his system.