You know you’ve been to a country concert when you see two men wrestle, a girl with a bad spray tan, and a guy kissing his girlfriend with dip in his mouth. Oh, and this same Bubba with the dip can was also grabbing his girlfriend’s rear while her DAD sat next to them! Eeeew!

When I got two last-minute (FREE!) tickets to the concert, I wasn’t sure if I would like it. Turns out I’m a huge fan of hers, I just didn’t realize she was the one who sings all of the songs I love so much. I’ll be rocking out to her greatest hits album for the next week. 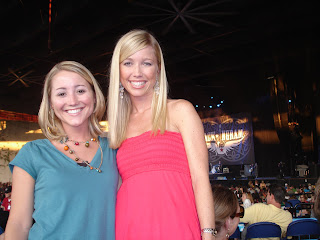 Sister Lindsay and I had a great time together. And this concert marks another notch in my belt of summer culture. Let’s see… I’ve seen Martina (along with Jack Ingram) and the Eli Young Band in concert, went to Shakespeare in the Park, saw the Fort Worth Symphony, went to Mama Mia on Broadway, and next week, we’re going to catch the other big Broadway hit–Jersey Boys. All of this in the past four weeks. Not a bad month!