Skip to content
August 16 marked the one-year anniversary since Mr. Right dropped to a knee and proposed. I’ve always been big on anniversaries – I love to mark the wins and reminisce about past adventures and reflect on what the Lord has done for us since the last milestone. 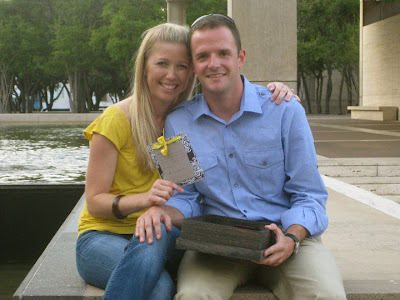 So how did we celebrate this anniversary? We went with another couple friend to see The Help (which I think was even better than the book version I read last year) and then came home and re-read the letter Mr. Right used to propose. If you assumed that this weepy woman shed a few tears reading my love letter… you would be right. (You can see it’s one of many, many love letters I’ve collected from my man.) 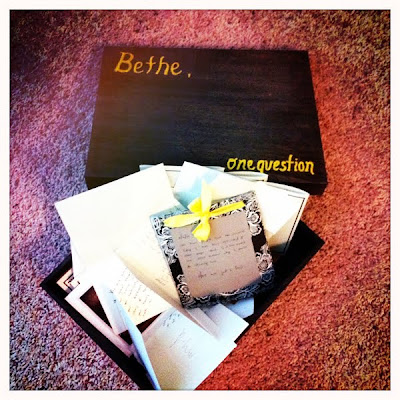 I realized I’ve never told the story of how we got engaged… so here goes:
Mr. Right says he knew on our first date that we would get married. It took me a few weeks, but then I too was hooked. We waited six months, which seems fast to some people and slow to others – I’ve come to realize that everybody is different. For us, the decision was a very easy one.
We talked about everything, including our engagement, ahead of time. Mr. Right told me he would propose sometime in August or September, so August 1 came and went, and I got into hyper-vigilant mode. Every time we got together, I tried to make sure my hair and outfit were absolutely perfect. Since we were hanging out almost every day, that meant about 12 wasted outfits and good hair days.
He picked the one day I never would have expected it. We planned to go to dinner with a couple in our church who had offered to do our marriage counseling once we got engaged. I barely knew them yet (Mr. Right was much closer to them at the time), and being the organized planner that I am, I even confirmed with them at church the day before that we were still on for dinner.
They played right along.
Mr. Right was scheduled to pick me up for dinner. I was worried about making a good impression. And then there was a knock on my door, and instead of my man, it was my sister, who said she was there to kidnap me. She wouldn’t tell me where she was taking me.
I knew at that moment that this was it. And I immediately froze. Stopped talking. Went into a daze.
She drove me to Fort Worth. That 15 minute drive dragged on forever as I vacillated back and forth between wanting to pee in my pants with excitement and being too shocked to process any coherent thoughts. So we drove, mostly in silence.
My sister pulled up to the museum district, and standing in front of the Kimball Art Museum was my Mr. Right, looking dapper and holding a wooden box with a giant yellow bow. He took me by the hand and led me to the museum steps, next to the reflecting pool–the site of one of favorite dates when we sat lazily on those museum steps and dreamed about our future together, watching the sunset over that reflecting pool.
But back to the proposal…
He led me to our spot and handed me the box that he said he created for me to hold the many love letters he would write me in the future. Inside was a love letter telling me why he wanted to marry me, what he had prayed over our relationship, and his dreams for our future. It was the perfect proposal for this sentimental sap who loves to reread my love letters over and over and over. After I finished the letter, he dropped to one knee and presented me with a gorgeous ring. I said yes, cried, did a little hugging and jumping up and down, and then my sisters suddenly appeared with cameras and we did an impromptu photoshoot to celebrate the day. 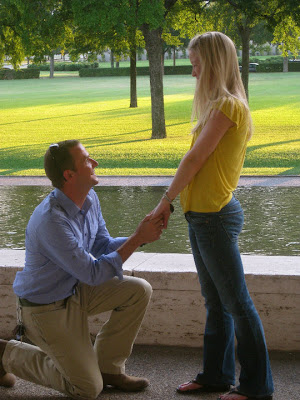 I felt so loved. 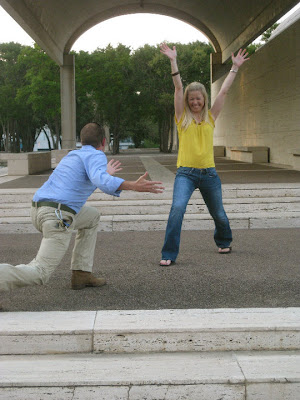 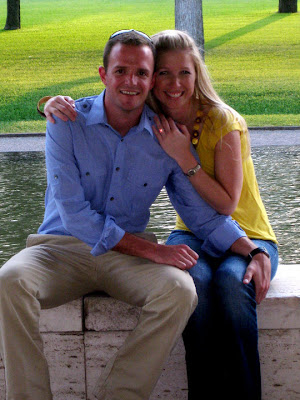 In honor of our big day, I thought I’d share the save-the-date video I created for our wedding. Every time I hear this song now, I get warm fuzzies.