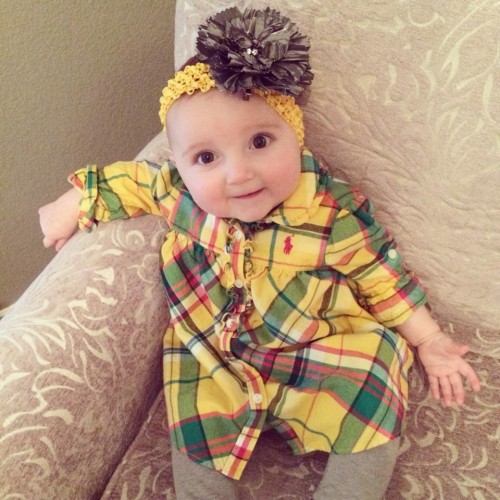 I’ve figured it out. My mom used to tell me that if childbirth was that bad, everybody would just have one kid. Meaning, it’s not that bad and that’s why people keep having babies.

But I know the secret. The reason people keep having babies is because one day they wake up and their baby turns four months old and they become SO MUCH FUN that they want to have 10 more.

I knew being a mom would be a blessing, but I had no idea just how fun it would be. To all of my friends with newborns who are dealing with sleepless nights, and heaven forbid, colic, I have encouragement for you. Four-month-old babies are God’s reward for all of the stresses of having a newborn. When they’re four to six months old, they are like Christmas and your birthday rolled into one, every single day.

Wrenn is almost six months old , and here’s some of the things I absolutely love right now:

She talks. All the time. She coos and grunts and makes a tooting noise with her mouth that she finds to be hilarious. Maybe it’s because I do it back to her and next thing I know we’re making funny sounds at each other and we’re having our own conversation in our secret language. I think we’re going to have a big talker on her hands (takes after her parents).

She laughs. I waited forever to hear that precious little laugh, the one that sounds just like mine, and I will do anything – and I mean ANYTHING – to make that baby laugh. It’s the best part of motherhood.

Except for the kisses. Baby girl loves to give open-mouthed, slobbery, wet kisses. I didn’t think there could be anything better than hearing her laugh, but getting a big, slobbery kiss on the mouth or cheek from her is the best feeling in the whole world. She’ll plant a few kisses on me, then hug me and nuzzle her head into my shoulder, then sit back up and give a few more kisses, then cuddle again. Oh my goodness, I want to have a dozen more babies if it means more of this.

She has discovered her hands. And she stares at them, turning them over, moving her fingers as she studies them and then smiles in delight at these strange things attached to her body. The only thing more interesting than those hands… is her feet. Which she can now put in her mouth. If only I was half as flexible as she is. I love watching her play with her hands and her feet.

Actually, I love watching her discover things. First it was her hands and feet, now it’s the whole world. She studies people intently. She looks for the dog. She is fascinated with textures – I recently took her grocery shopping and I let her touch every item as I put it in the basket. She sits in her exersaucer and plays with all the toys and you’d think she was conducting some elaborate science experiment. Watching her learn about her world and the endless possibilities it contains is one of my great joys.

The only thing better is to see the way she looks at her daddy. When Mr. Right walks in the room, everything else stops and she gets a big grin and can’t take her eyes off him. She makes eyes at him, smiles at him, talks to him. If I’m feeding her, she stops every minute or so to look to see if he’s still there. If she hears him rustling around in another room, she has to search him out to see if it’s him. She looks at him like he hung the moon. She has no idea how much he loves her yet. I don’t know that she’ll ever fully comprehend it.

Yep, four to six months is the best stage. I don’t know how it could possibly get any better than this. (Winking, because I’m pretty sure things are about to get even better.)

Mamas, what age is your favorite so far?