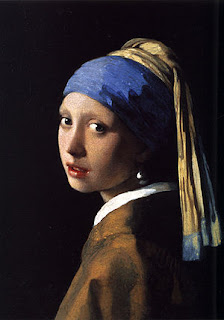 Today, I was the Girl with the Pearl Earring.

Just the one.
Because the other fell out somewhere. I wasn’t sure where. It doesn’t help that I work in an incredibly huge hospital with six floors, and this morning I decided to run all over the hospital, never taking the same route twice.
After I finished all that running, I realized I had lost my favorite earring. It was part of the set that my parents gave me a few years ago. I love them. And one was gone.
After retracing my steps and calling our Lost & Found department, I gave up. And then, on a whim, I decided to send an email blast asking folks to watch out for my earring.
And then came the happy ending. At 9:30 tonight, someone from the radiology night shift called to say that a patient had found an earring on the floor. He didn’t think much of it until he checked his email and realized it was mine. We will be reunited in the morning! Hooray!