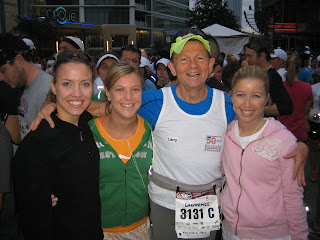 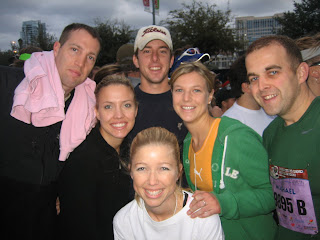 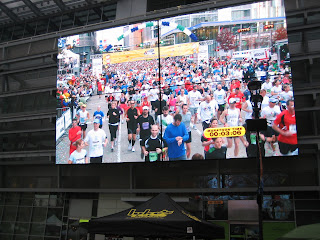 Okay, I had promised a re-cap on the White Rock Half Marathon. Here goes…

The race was one of those really cool moments in my life… I worked so hard, for so many months to be able to do this. I’m not a runner. I never will be. I have asthma, I’m not a super athlete, I tend to be a bit lazy, and I’m very, very busy. So the fact that I did this without giving up was kind of unexpected.
I ran it with three friends from church. I couldn’t have done it without the camaraderie that went along with running with friends. Otherwise I would have quit after a few weeks. They made it fun.
Here’s a play-by-play of the race, for the two people who might care…
1. The night before, we went for high-carb pizza, and then an emergency trip to pick out a running outfit for Sara. Luckily, we found success quickly and made it home in time for a good night’s sleep.
2. I woke up at 4:45 a.m. on Sunday and rode with my friends to Dallas. Sara and I had debated about wearing make-up for the race… it seems so vain, but we knew we were going to se a bunch of people out there, and we didn’t want to look like death. So I ran my race with a tiny bit of mascara, eye liner, and concealer. I’m sure it all sweat off after mile 2. But what can I say, I’m a girl.
3. About five minutes before the race began, I realized my iPod, filled with my super-awesome running playlist, had frozen. It wouldn’t work. In a panic, I called Sister Lindsay who lives in Dallas and asked her to meet me at mile 6 with her iPod. I think I may have to sue Apple. And I think I’m going to need to get Lindsay a nicer Christmas gift for saving my life with a new iPod to distract me from the pain I was feeling. She rocks.
4. Speaking of pain… I felt a lot of it at mile 5. It was pretty hot and there wasn’t much water on the course, and I got a stomach cramp…. one of those that feel like a knife twisting in your side. It was so bad at one point that I either wanted to throw up or curl to the fetal position. But at that point there was nothing to do but keep plugging along. The cramp lasted about 1.5 miles and really slowed my time down. But that’s okay… sometimes those things happen. And it went away before mile 7.
5. I felt absolutely fantastic for miles 1-4, and then again for miles 7-10. Around the tenth mile I started to feel like I might throw up. It’s not really very fun to run while half expecting you might hurl at any given moment. So I had to do some more walk/run for awhile.
6. I think around mile 12 is when I wanted to die the most. Isn’t running fun?
7. And then, after 13.1 miles, I crossed the finish line. That part was fantastic. It meant I could stop… no more running, no more wanting to throw up, no more stomach cramps… they loaded me up with a finisher’s medal, a t-shirt, a cup of water (yes!), and I was instantly a much happier girl.
My time was a lot slower than I had wanted it. I basically ran about a minute a mile slower than had been my goal… but that’s okay. I finished. And even though for a good part of that race I was in extreme pain and wanted Jesus to come down out of heaven and rapture me so I could leave the miserable run behind, I still have really good memories of the day. I got to run with 17,000 other runners, while 150,000 spectators cheered me on for 13.1 miles. And I got to do it with friends. While wearing mascara.
On Sunday, after the race, I thought I might never want to run again. Today, just three days later, I’m seriously considering doing this whole thing again. Only faster. 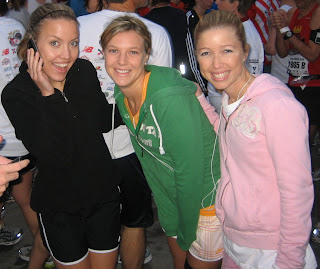 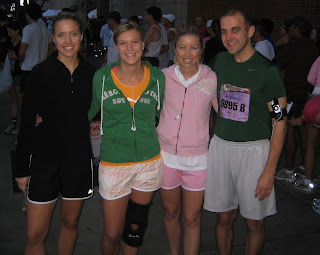 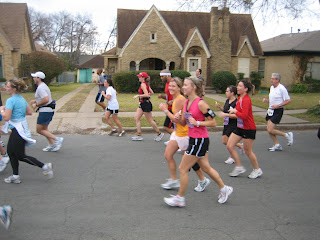 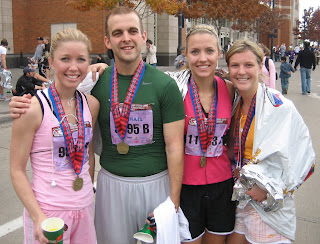 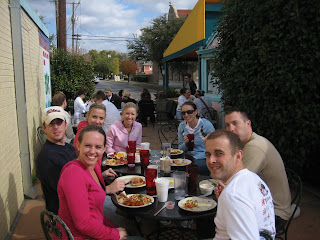 By the way… I’m not sure why the photo spacing is so whacky… so you’ll just have to ignore that. I couldn’t post captions… but wanted to explain the first photo with the old guy. That’s Larry, who has the Guinness World Record for most marathons in one year… this was his 105th marathon in 2008. Not only that, but he has run a marathon in all 50 states. I haven’t even been to all 50 states, much less run a marathon in them! So of course, we had to get a picture…