In honor of Valentine’s Day, here’s a throwback post from the archives, originally published Feb. 6, 2010 (ironically enough, just a few weeks before Mr. Right and I started dating). It’s funny to look back at the MANY (there were SO MANY) awkward dates I had. Oh Mr. Right, you are such a catch!

In honor of Valentine’s Day, I came up with a list of some of my funniest, most embarrassing or most awkward dates.

The Money Date: On one of my first dates in high school, the heart throb of my youth group asked me out to dinner and a movie. Only he didn’t bring enough cash, and in my naiveté I hadn’t thought to bring money of my own, so we had to leave the movie ticket line, drive to his parents’ house, and borrow money from them. You can bet that I have never gone on a date since without plenty of cash, just in case.

The Imodium Date: I had been dating a guy for only a few weeks when we went to a little sandwich shop to grab lunch. Halfway through the meal I felt horribly nauseous and had to excuse myself to the bathroom. Once there, I wanted to curl up in a ball on the floor of that nasty public restroom and die a slow death. When I finally emerged after ten LONG minutes of humiliation, my new boyfriend offered to take me home, but I had to hang my head in shame and admit that I wasn’t sure I could make the drive home just yet. So we had to awkwardly stay at the restaurant while I managed to become ill several more times before I could brave the ride home and crawl into my bed. I was so surprised to hear from him again.

The Caulking Date: I had to go to a $500 a plate black-tie gala as part of my job, needed a date, and didn’t have any good guy friends I could bring. My sweet friend offered to set me up with one of her law school buddies, but there was one hitch: he had a golf tournament and wouldn’t have time to go home and clean up before our big night out, so he would need to shower and get ready at my house. At the time I lived in an old rent house with a very old shower, so I spent half my Saturday scrubbing and caulking the shower tiles so they’d look good for the boy. He finally showed up at my house, all sweaty and dirty, I answered the door in my nicest black formal dress, and after a quick introduction I showed him to my room. While he showered, my two roommates and I just sat on our couch in the living room and giggled at the weirdness of a strange boy in my bedroom (I was NEVER in the bedroom with him). About 20 minutes later he emerged in his tuxedo, we hopped in the pumpkin carriage and headed to the ball. It was just like Cinderella, but with a caulking gun.

The Eskimo: My first boyfriend in college was was an atheist eskimo. Trust me when I tell you that it ended the moment I discovered my Alaskan friend was an atheist.

The Punch: Once on a date, my boyfriend accidentally punched me in the face. We had snuck in late to a movie, it was pitch-black, and as he whipped off his jacket, his fist hit me HARD in the eye. Of course it was a freak accident, but he felt horrible for the rest of the evening and begged me not to tell my dad. Lucky for him, the bruising was minimal.

The Spill: I dated a guy who was absolutely in love with his car. He put a car cover on it EVERY SINGLE DAY when he went to work – that thing was spotless. So you can imagine my horror (and his) when one hot summer day my rocky road ice cream cone melted ALL OVER the inside of his car. A chocolate, sticky mess everywhere.

The Mojo Killer: I was at a networking luncheon and a handsome stranger (sans wedding ring) got in the lunch line behind me. I was trying my hardest to look desirable yet cool when an old colleague came up to me, right in front of him, and said, “Oh Bethe… we’re all worried that you’re NEVER going to find someone. Are you EVER going to get married????” Awesome.

Probably A Bad Match: On my most recent blind date, I knew things probably weren’t going well when he (1) refused to talk about church, (2) threw down a few cuss words, (3) talked about getting so drunk that he had to walk home the night before, and (4) told me he drove to Dallas three nights a week to play in various kick ball leagues. Really… kickball?? Luckily I was able to drown my disappointment in molten chocolate cake, so it wasn’t a total waste.

And for the most random moment in my dating history: one Christmas I got asked out by one of Santa’s elves. Seriously. I said no. 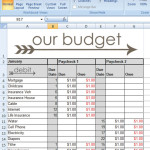 Have you downloaded my quick and easy budget? It’s available at Texas Lovely on Etsy.