I think I’m going to have my Sunday School class pray over everything… because God sure answers their prayers! It’s been so fun to watch Him answer big prayer requests (like healing from terminal diseases) and small prayer requests (like finding roommates). So when my class prayed that sister Sarah and I would have a good trip to New York, I should have known it would be blessed.

Boy was I right!

Every single detail of our trip had the divine hand of God on it. I have never experienced anything so smooth. It was amazing. And fun, and relaxing, and absolutely wonderful.

But before I get all mushy, here’s the highlights, and some deep thoughts from my trip.

1. New Yorkers pretend to be hardcore, but they’re really nice people. And they LOVE the stereotype of being thieves preying on poor, clueless, southern tourists. Not once, but TWICE (within 10 minutes) we had New Yorkers offer to take our picture and then take off running with our camera, only to turn back laughing hysterically. We get it. Don’t give your camera to strangers. We Texans are just too trusting!

This photo was taken right after someone tried to “steal” our camera. 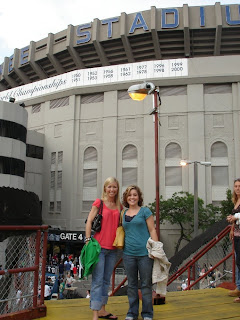 2. Being in New York, surrounded by so many people from all walks of life is good for my spirit. It reminds me that there’s a whole world of people outside my comfort zone of Fort Worth, an endless amount of possibilities. It reminds me that my world is so much bigger than I tend to notice.

4. I had my best pedicure EVER in New York. It included a 20-minute foot reflexology massage. It was my best souvenir of the trip, and was just what I needed after walking around Manhattan all day in my cute flip flops.

5. I love the Subway. It’s so much more fun than taking a taxi, and makes me feel adventurous. And brave. And worldly. I also like to talk to people on the Subway. In fact, I like to make friends wherever I go in New York. I think there’s something fun about being a “foreigner.” And everybody loves to hear about Texas.

6. We went all the way to New York, and we still did most of our shopping at major chain stores–Banana Republic, New York & Company, Williams & Sonoma, Ethan Allen. And you know what? Who cares! It made us happy to shop at the super-gigantic versions of our favorite stores.

7. Speaking of shopping, we saw them film an episode of “What Not To Wear” at New York & Company. 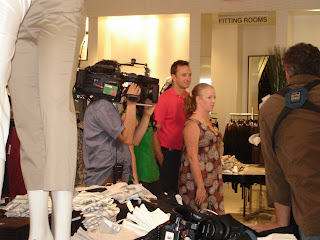 We also saw Jamie Lee Curtis, and met Meredith Viera from the TODAY Show! It was a successful celebrity-spotting trip! 8. Speaking of Meredith, she was SOOO nice! We watched the TODAY Show (and were on for 3 seconds… which means we’re “kind of a big deal” now) and Meredith literally went to EVERY person there and took photos with them. Matt Lauer, on the other hand, waved and quickly went back in the studio. I wasn’t impressed.

9. We saw Mama Mia on Broadway. Sarah somehow scored us 7th row tickets. It was FANTASTIC! Of course, I was singing “Dancing Queen” for the next three days, but it was worth the minor annoyance.

10. We saw someone get beer spilled on their head at the Yankee game. It was just like people said. I didn’t see anyone get pelted with batteries, but I did hear plenty of expletives shouted at my beloved Rangers. Especially when we came back in the 9th inning to WIN! It was probably the most amazing baseball experience of my life, and I’ve been to a lot of games. 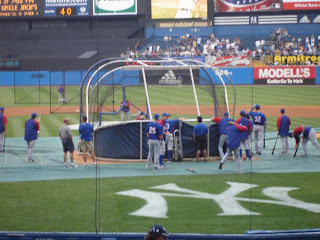 But now it’s back to the real world of Texas. Going to New York makes me wonder about what kinds of adventures I need to seek out in my lifetime. Do I want to live somewhere fast-paced and exciting like New York? Or maybe uproot to Europe for a year? Or stay in Texas, where things are safe and comfortable, and leave the flashy cities for my vacations?

Whatever happens, New York, thanks for taking good care of us this week! It was a great trip. I’ll see you soon!