In case you missed it, here is part one and part two of Wrenn’s birth story.

After Wrenn was born, Mr. Right and I spent about an hour with her, just the three of us. She breastfed a little, but mostly we just loved on her and savored those first few moments as a family of three. Then we welcomed back all of our family members, who had waited so patiently all day (the entire labor was 11.5 hours from the time my water broke until the time she was born), to meet our precious little girl.

Once they left, it was still several hours before I was recovered enough to move to a postpartum room. Moving me from one bed to the other was by far the most painful part of the entire childbirth process – so painful that I couldn’t sit down in a wheelchair, so they had to move me on a “people mover” – basically a dolly – and roll me down the hallway, half standing, half sitting, wrapped in a blanket at 3:30 in the morning.

Let’s just say that it wasn’t my finest moment.

I only got an hour of sleep that night because my body was still so wired from the day’s events. The next day we had visitors from around 8:00 in the morning until 10:00 that night. It was a wonderful, exhausting blur – such a joy to introduce our precious daughter to our closest friends and family (and coworkers… lot’s of coworkers since I delivered at the same place I work). I was still in a good amount of pain, but I was also able to take a shower and do my hair, which made me feel so much better. 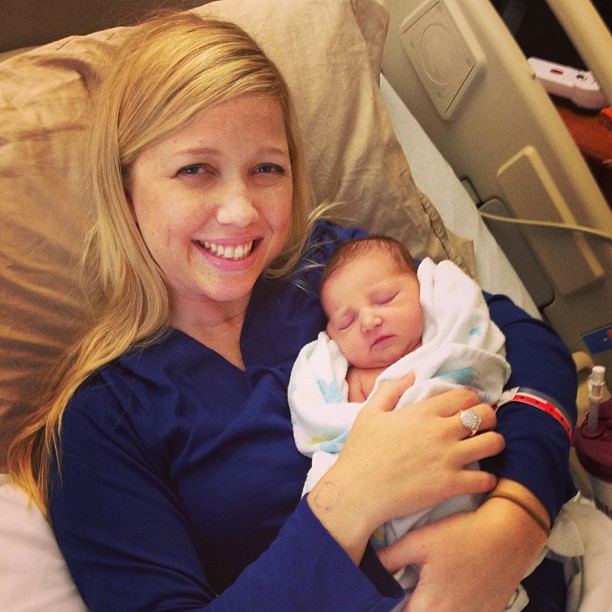 The second night in the hospital was much harder. Miss Wrenn decided she was no longer interested in feeding, so Mr. Right and I spent half the night trying unsuccessfully to get her to latch and eat – a two person job that left us with almost no sleep.

This is the part where I should tell you that on Wednesday, while I was in labor, we found out that Mr. Right had a fractured pelvis. It was from last month’s bicycle accident – his pain had gotten worse and worse over the past few days, and he had gotten an MRI that morning (thinking I would be induced the next day), and the results came in half-way through my labor. He was in major pain but gallantly pushed ahead with the help of some strong pain medicine his doctor called in for him. 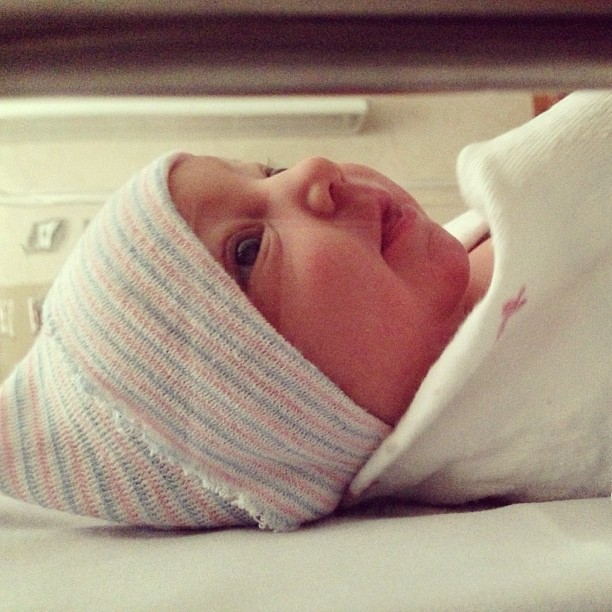 However, during a 2:00 a.m. feeding, he took one of those pain pills on an empty stomach. By 6:00, he was violently ill, so much so that I had to send him home to get some food in his system and sleep it off. I called my mom and asked her to come up to the hospital to help me while Mr. Right suffered alone at home. My heart broke for him.

He was sick ALL DAY LONG. Around noon we started to wonder if instead of a bad reaction to his medicine, maybe he had picked up a virus or food poisoning. Here we had a two-day-old newborn, we were scheduled to be discharged from the hospital, and I possibly had a contagious husband at home. We started thinking about Plan B, and Plan C… would he go stay with his parents? Would I take Wrenn to my parents? Could we coexist at home without exposing baby girl to germs?

I broke down and cried. This was NOT how I planned things. I so wanted to go home to my house, with my husband to help me. I’m sure the hormones and the fact that I hadn’t slept in two days didn’t help.

I’m so thankful for Wrenn’s pediatrician. I explained everything to him at her discharge visit and he told us that even if Mr. Right had a stomach virus, he wouldn’t spread it to her unless he kissed on her. He said it would be fine to go home and have him there with us. My sister offered to spend the night and help care for her so that we could both get some much-needed sleep between feedings. Mr. Right was finally okay enough to pick us up at the hospital and drive us home around 5:00 that evening. 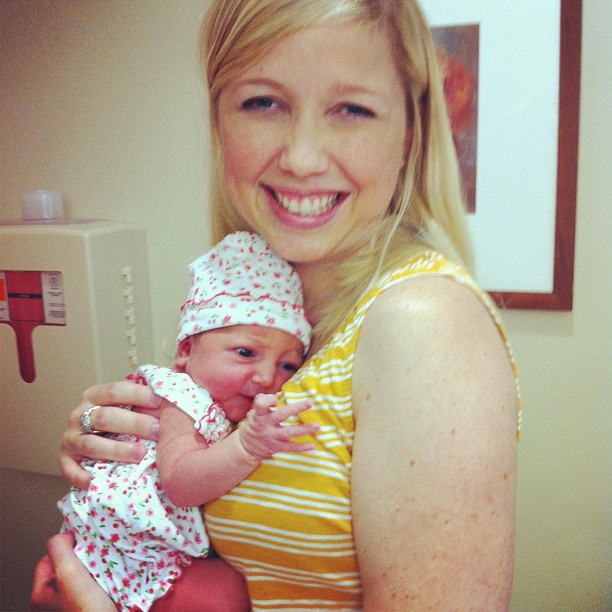 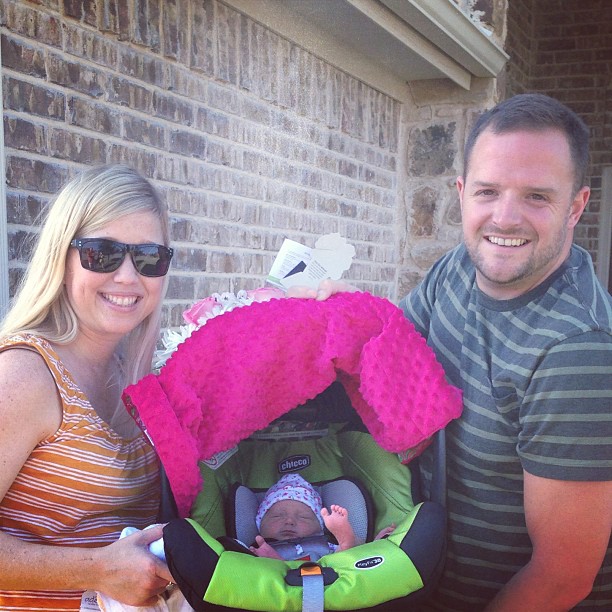 This is where I should mention how thankful I am for my mom and my sister who so kindly helped us out during this unexpected mini-crisis. My family, along with Mr. Right’s family, helped us so much during those first few days so that both of us could get some rest – something I just couldn’t get enough of. 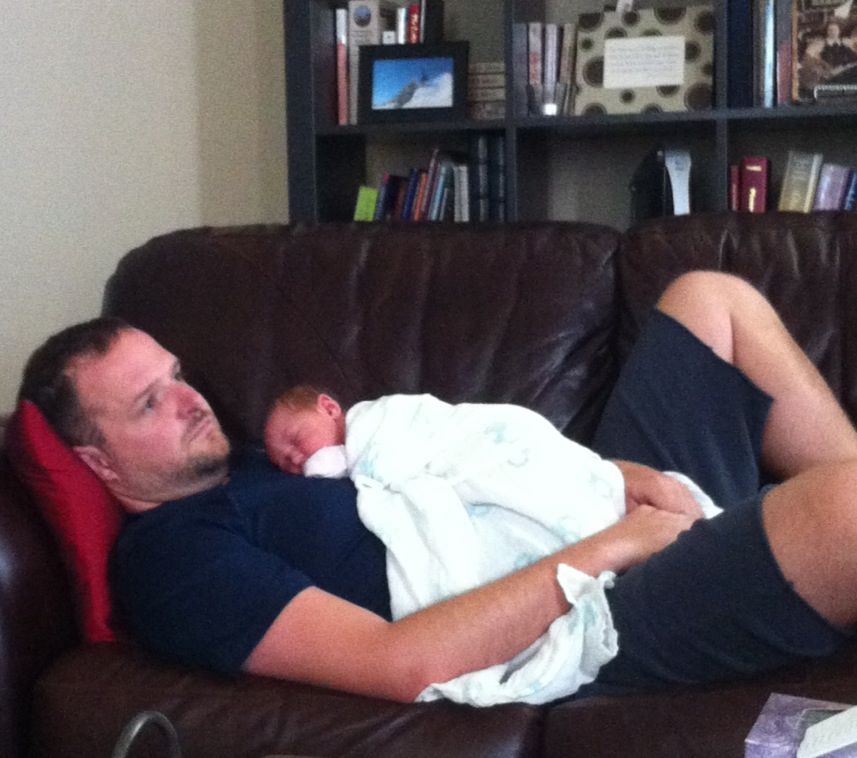 Poor Mr. Right couldn’t hold his brand-new baby that entire day. We decided it was just too risky, so he waited until Saturday morning, 24 hours after his symptoms had arrived, to get to cuddle that sweet baby of ours. He spent the entire morning with her sleeping on his chest, soaking her up. It was the sweetest thing to watch – he is such a loving daddy. 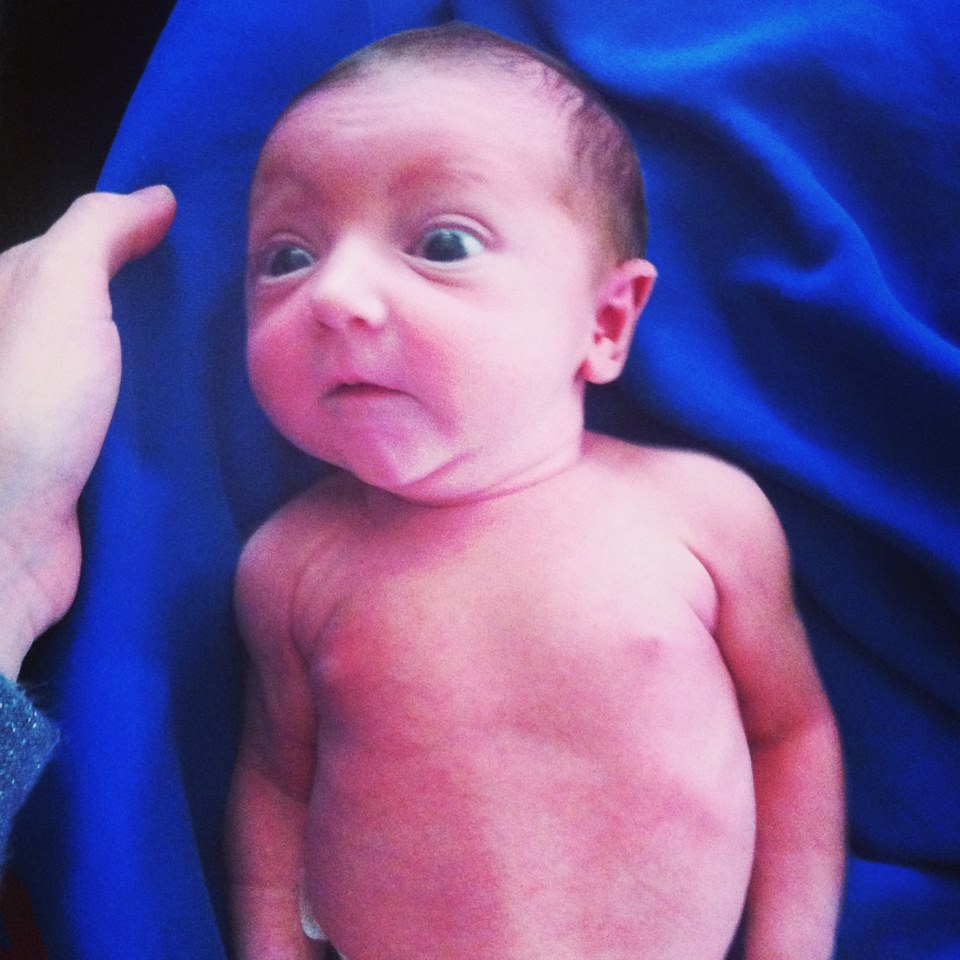 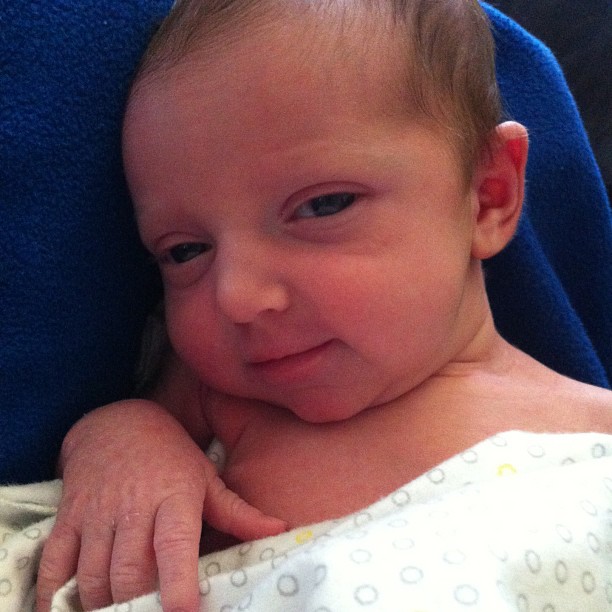 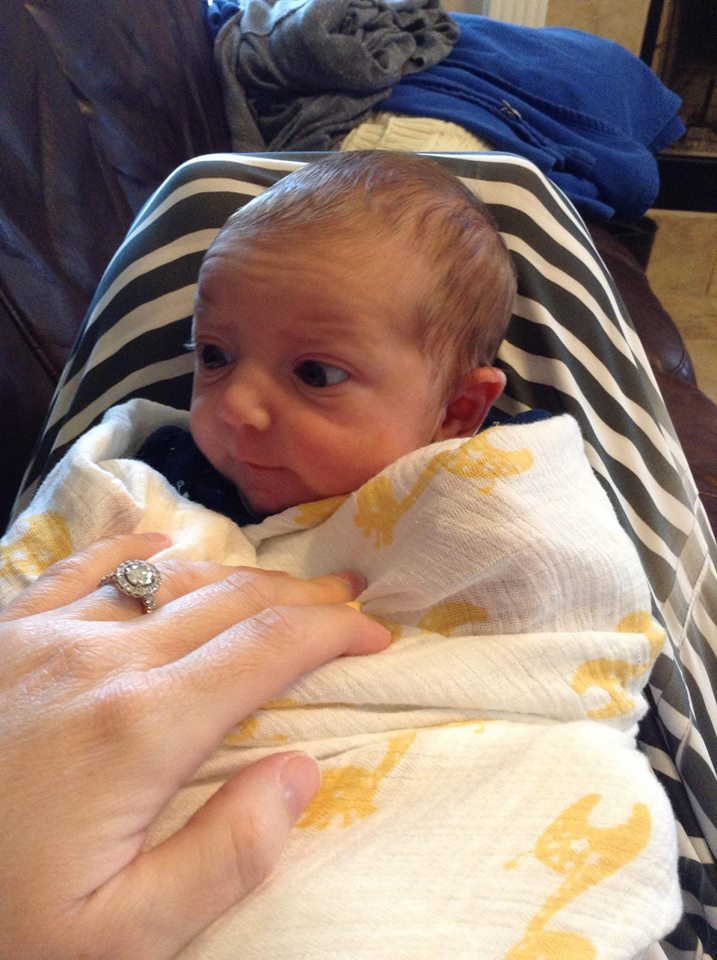 The past three weeks have since been a blur of around-the-clock feedings, sleepless nights, visits from friends and family, and trying to find a rhythm to this new life of ours. I will admit that I have cried almost every single day (I hear it’s the hormones – I’ll be so glad when they level off again), but I have also felt such overwhelming moments of joy. After the first week we started venturing out – we had our first family date night, I took her out by myself for the first time, I ventured out for some “me time” without her for the first time. Each “first” brought satisfaction that this is our new normal as a family of three… that we can do this parenthood thing, even though at times it’s a bit messy (like when she screamed… and screamed, and SCREAMED at the store last week). 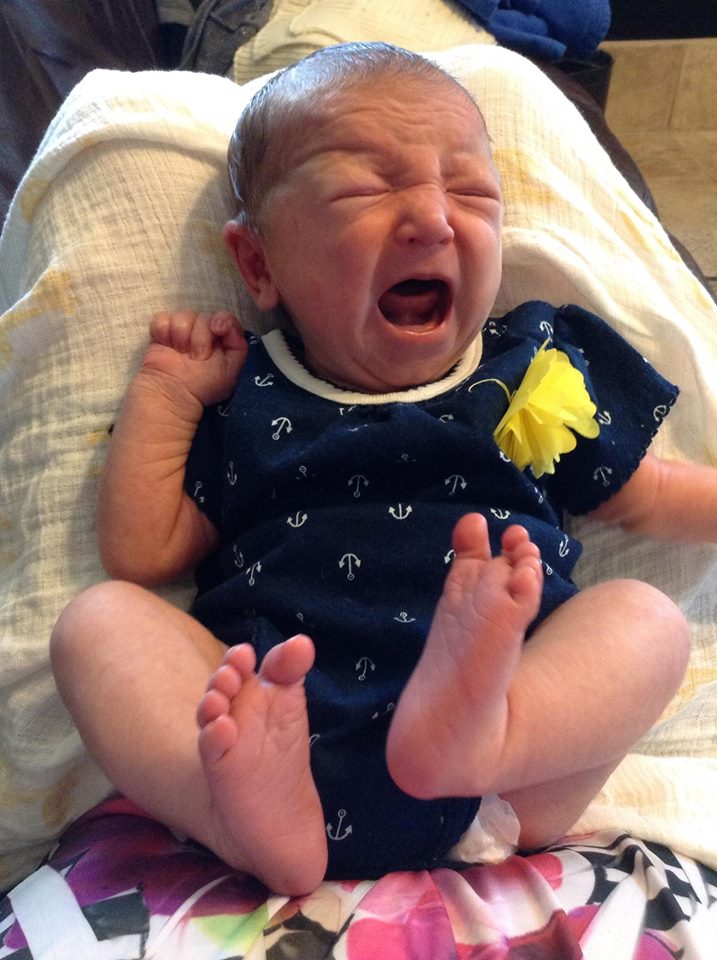 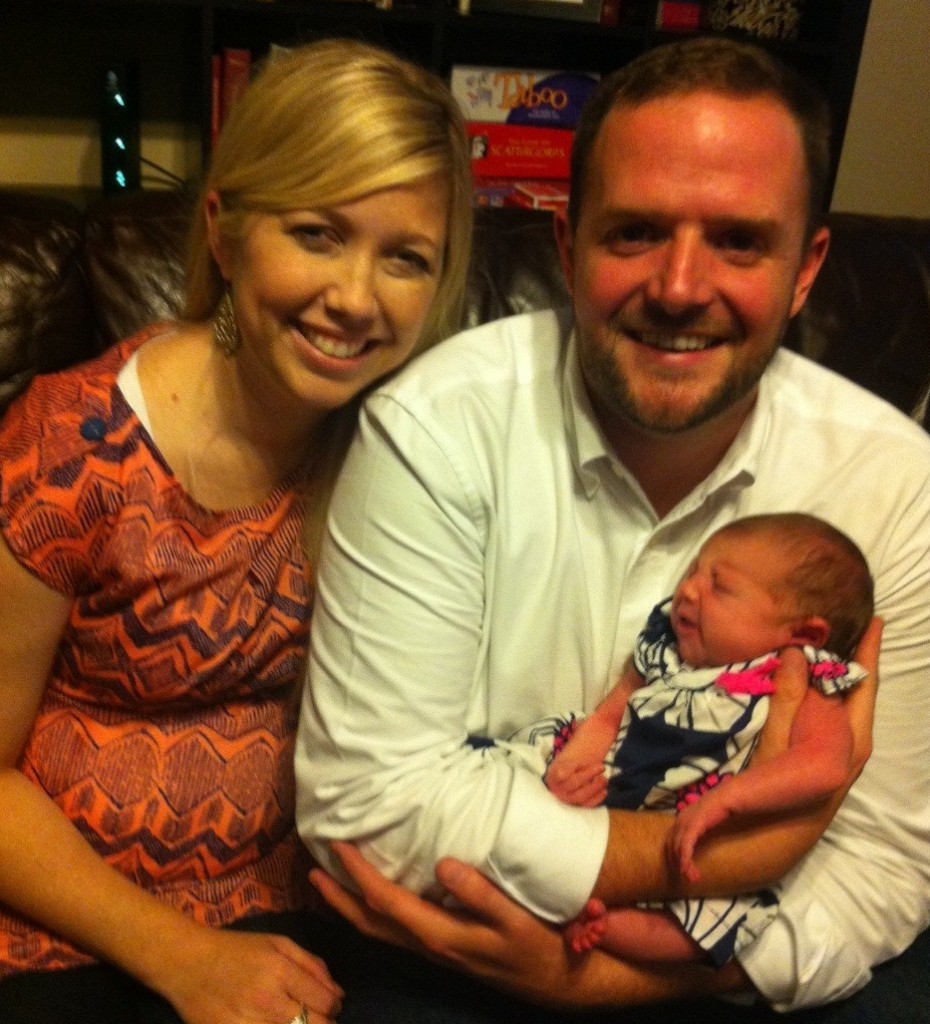 And through it all, I am more in love with Mr. Right than I ever knew was possible. Watching him take care of both of us… taking shifts so that I could sleep, encouraging me to get out of the house alone so I could have a break, calling the lactation consultant when I became discouraged. And watching him love on his first daughter and seeing him as a dad for the first time is the sweetest sight for these tired eyes of mine.

We are so in love with that beautiful baby girl of ours. I don’t know what we ever did without her.