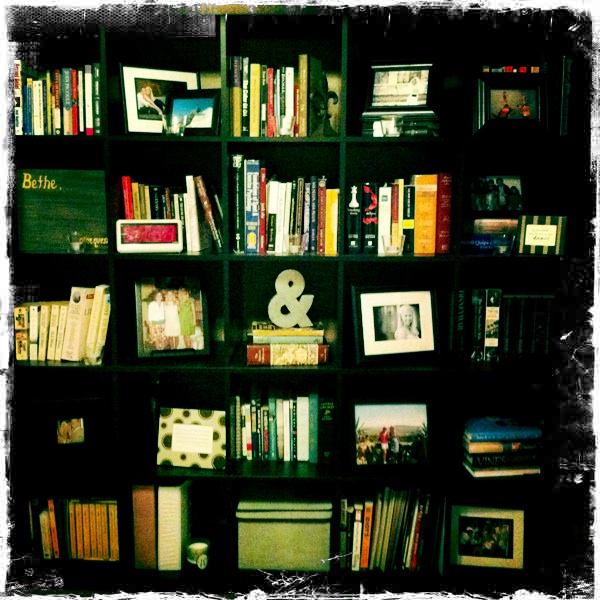 I have spent a lot of time with the books on these bookshelves. Here’s my latest reads since May:

Prisoners of Hope, by Heather Mercer and Dayna Curry
I picked this book up for about $0.25 at a used book sale – so glad I did. This is an autobiography about the two Baylor missionaries who were imprisoned in Afghanistan back in 2001. I was at Baylor during this time and prayed for these girls’ release, so it was very interesting to read this. I highly recommend it.

The Secrets of the FBI, by Ronald Kessler (audio book)
This may be my favorite book I’ve read in the past 5 years. No kidding. It was fascinating. I learned all the ins and outs of the FBI – how they break into peoples’ homes and businesses to plant bugs, and how sometimes these covert operations go terribly, terribly wrong in some wonderfully comedic ways. The book jumps around between the history of the agency and current secrets, but it as fast-moving and super interesting.

The Broker, by John Grisham
This followed the typical Grisham formula, but most of the book takes place in Italy, a country that I love and have traveled all over… twice. So read it simply for the great Italian experience. Better yet, stick it in your carry-on on your next European adventure.

Decision Points, by George Bush (audio book)
I loved “reading” this as an audio book, because Bush himself reads it. I read Laura’s book earlier this year on our honeymoon, and after reading both of their stories, I love them even more. While I don’t agree with all of his decisions during his presidency, I am confident that he is a faithful man of God who made decisions that he thought were right at the time.

I’m Feeling Lucky: The Confessions of Google Employee Number 59 (audio book)
Mr. Right and I listened to this book on two back-to-back trips to Midland over the summer. The author kept us company as we made the five-hour trip back from West Texas in the middle of the night, stopping at Stripes gas stations for caffeine and potty breaks. The book was fascinating… the story of one of Google’s earliest employees, about how none of them really had any idea what they were doing, but somehow they produced greatness.

Hunger Games Trilogy, Suzanne Collins
Like I told my perplexed husband, “It’s about kids who have to fight to the death on national TV… but it’s not violent.” Loved these three books. Can’t wait for the movies.

Bossypants, by Tina Fey
Liked it, but it’s not as much about Tina Fey’s life as it is one giant comedy sketch. But I still laughed out loud.

Frost/Nixon: Behind the Scene of the Nixon Interviews, by Sir David Frost (audio book)
This is the story of the famous Nixon interviews after his resignation. I love history and politics, and I enjoyed listening to this as I painted Mr. Right’s house getting it ready to sell. It made the time fly by.

The War Within: A Secret White House History 2006-2008, by Bob Woodward (audio book)
This book told the behind-the-scenes story at the White House during the Iraq War – how decisions were made, how inefficient things ran and how nobody really knew what they were doing. It was a fascinating book, although I don’t recommend purchasing it through iTunes as it came in two giant chapters, and for some reason it kept losing its place. So annoying.

Water for Elephants, by Sara Gruen (audio book)
I liked this story, but not the language, and I think hearing bad language is worse than reading it for some reason. I also didn’t like that this story was about infidelity – I’ve noticed a lot of books and movies center around this topic, and I just don’t like it.

So if you add these to the seven I read earlier this year, that means that as of the end of September, I have finished 19 books in 2011. Listening to audio books while I drive and quilt has helped me to almost double my reading output.

From my friends… any book recommendations? I need to add to my list.