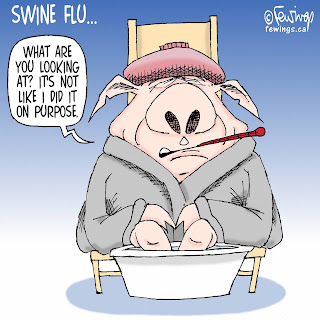 I think I had the Swine Flu. Err, I mean the H1N1 virus. After all, one must be politically correct and not accidentally offend the pig population.
It’s ironic since I’m the girl who had the pet pig in junior high. Daisy the Vietnamese Potbelly Pig was the cutest little thing ever and made for great entertainment in our otherwise normal suburban upbringing. Okay, so there wasn’t a lot of normal in my upbringing, my parents also bought us a Chinese Goose named Casey… it was like the United Nations of farm animals at my house growing up. If only we had had a gold fish from North Korea, our collection would have been complete.
So back to the swine flu. I got sick Tuesday, finally went to the doctor on Thursday, and the whole time was convinced that it was merely a sinus infection. Maybe bronchitis. I had a fever, but it wasn’t high, and it hadn’t been around long. I told him I was convinced it wasn’t the flu, so we didn’t even test for it. He gave me my decongestant drugs, along with some asthma medicine, and sent me on my merry way to heal at home.
But now I’m almost convinced that it was indeed the flu. I had a fever that lingered for several days. My throat hurt, I developed a cough. I got severe body aches. Minor chills/sweats. Extreme fatigue. Repeated asthma attacks. It was just like last year’s flu, only about half the intensity. Last year’s flu lasted almost two weeks, this time I’ve been sick about six days. Last year I ran a high fever for 9 days, this year it never got over 99.5 and lasted about four days. Last year I could barely crawl off my couch to get a glass of water, this year I have been up and around a good bit, but tire easily. If this was indeed the swine flu, and I guess I’ll never really know for sure, I can assure you that it was a heck of a lot better than the regular old seasonal flu that just about wiped me out.
I realize we should all be vigilant and wash our hands, stay away from sick people, etc. But I can also assure you that this flu bug was more of an extreme annoyance than anything else. It wasn’t worth shutting down a school over. It wasn’t worth mass hysteria. It just required a few days of popping Advil and watching hours of mindless television while lying on my couch.
But I’m almost better. I have defeated the swine, and I will live to see another day. I think I should make a shirt that says, “I conquered the Swine Flu!”
But first, I must go lay back down on my couch and watch some more mindless TV. Hopefully tomorrow I’ll be back to normal.