Skip to content
I wrote a story in the 6th grade about my terrible, horrible, no-good, very bad day. My teacher loved it so much that she kept it, and years later she told me she was still showing it to her classes. Maybe it was an early sign that I would choose a career in writing. Or maybe I had written about a day that was so bad, even Mrs. Lewis was impressed.
This week has been THAT bad.
That car repair? Oh yeah, much worse than expected. When my dad broke the news to me, I dissolved into tears (again). He asked me over the phone, “Are you okay?” That’s when I told him that I felt the overwhelming urge to throw up.
Of course, I didn’t. But it would have added to my week.
Just about everything that could have gone wrong, did. From the moment it started until the minute work ended tonight, it was one set of bad news after the other. One stressful moment after another. One tough conversation after another. I’m really glad the week is over.
And then I went to dinner with my family, and everything changed. As I told them about my crummy week, we all started laughing at just how horrible it had been. Next thing we knew, we were laughing so hard that tears were streaming down all of our faces. I think the laughter began when my dad recounted that tearful telephone conversation, and I started hyperventilating just thinking about the cost of the repair bill (think thousands and thousands of dollars). The hyperventilating triggered a minor asthma attack, which just tickled everybody else, and from there, we couldn’t stop.
It was a great night.
And then, the night got better, because I spent it with my new favorite boy. 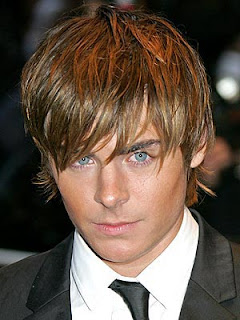 (Insert sigh here)
(Go ahead and insert another one here…)
(Maybe one more?)
After our family dinner my sister introduced me to the greatness that is High School Musical 3. Granted, I haven’t had that much cheese since my last jumbo pretzel at the hospital employee party that came with hot, melted cheese dip (and bbq sauce, another tasty pretzel treat). But Zac is just the cutest thing ever, and I’ll admit that I loved the dance numbers. Now I need to see HSM 1 & 2.
After the movie (and the out-takes, and the special features), we had a debriefing. My sister decided that in our family, she would be Vanessa Hudgins, and I would be Sharpay. I’m not sure how I feel about that, especially since that means Sarah would get the boy, and all I would get is some little yappy dog. But pink IS my color, and I do love my sister… although I’m not sure I love her enough to give up Zac without a fight.
Tomorrow will be better. I’m going for a run and then spending the day at the zoo with a friend. It has to be better… Surely it will be better…