Skip to content
I figured out why I have so thoroughly enjoyed Christmas this year… it’s because it’s been the first Christmas in ages that hasn’t been overshadowed by life events.
Christmas 2010 – Got married exactly two weeks after Christmas… so I was drowning in wedding to-do lists.
Christmas 2009 – Graduated from Grad School (and threw myself a giant party)
Christmas 2006-2008 – Grad School Finals
Christmas 2003 and 2004 – Moved
So that leaves Christmas 2005 as my only quiet, normal Christmas since college. And that was ages ago! But this year we are making up for lost time…
Mostly by baking and attending parties.
From last Friday to today I will have had gone to six parties. And since Mr. Right and I express love through food (and crafts), here’s what we did:
Chocolate-dipped marshmallows for a dinner we hosted at our house last weekend. They had kids… and kids love marshmallows. And let’s face it, I love marshmallows too… so it worked perfectly. (Mr. Right claims to not like marshmallows, but let the record show that he ate enough to convince me otherwise.) 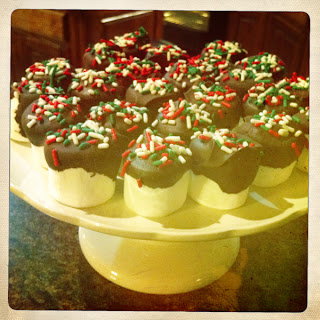 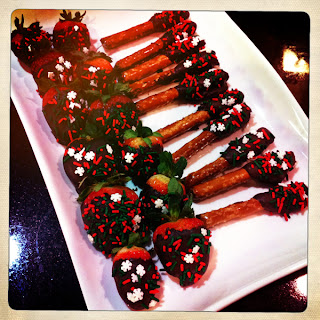 For a surprise birthday party Sunday night we made SIX DOZEN cupcakes – half iced in vanilla cream cheese icing, and the other half with Mr. Right’s super secret banana chocolate frosting recipe. It’s so good it’ll change your life. 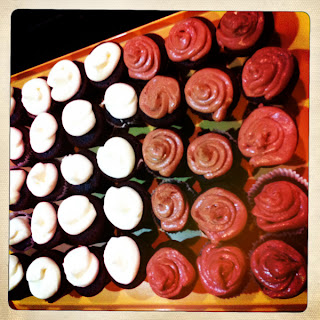 We were smart and only left ourselves a few at the house, and left the rest of the leftovers at the party, except for a handful which we dropped off at Andrea’s house because (a) she has become like an extended member of our family and (b) she loves Mr. Right’s cooking as much as I do, so we always try to swing her some goodies whenever possible.
Now that we’re just a few days away from the big day, I’m trying hard to stay laid-back and stress-free about my long to-do list, which includes wrapping presents (we haven’t wrapped a single one yet) and finishing a quilt (I see some hand-binding while watching Christmas movies in my plans for this week). The unimportant things, like vacuuming, will just have to wait until next week when I’m off of work for one whole glorious week.
Or maybe I’ll save it for my New Year’s resolutions… I’ve got to leave something for 2012.