My love-hate relationship with my Texas Rangers dates back to the late 1980s when I went to my first game.

Back then, as a first-grader, my parents would take us to games a few nights a week. It’s what our family did to bond. We’d take a huge thermos of Dr. Pepper, some snacks, and a couple of coloring books, and set out to the stadium to cheer on our favorite team. And our favorite player… Nolan Ryan.

Twenty years (and approximately 3,160 games) have passed, and my Rangers have never won the World Series. Or even the pennant. We had a few near-misses back in the late 90s, which was just enough of a tease to whet our appetites. But since then, it’s been a downward spiral of defeat and heartache. Of no pitching and poor coaching and bad trades.

Last year I gave up. I broke up with my Rangers. I dumped ’em like a hot potato, quit watching the games on TV, and never spent any of my hard-earned money on tickets. Granted, I get to go (for free) a lot for work, but last year it wasn’t very high on my list.

But now… my boys are back! I have forgiven them for all their past sins because they have once again become exciting to watch. My pal, Josh Hamilton, is the greatest Ranger since Pudge. I love to watch Kinsler with his tall socks and his baggy pants steal base after base. I love Saltalamacchia, not because he’s a great catcher, but because he has the longest name in the history of baseball, and that’s just cool. CJ Wilson has lot’s of attitude, Chris Young shows a ton of potential, and I was a bat-girl for Murphy back at Baylor, so of course I love him as well. My boys play with passion, with gusto, and with tons of heart.

So boys, I forgive you. If you keep scoring 10+ runs a game, and if you keep coming from behind in the bottom of the 9th for a win, I will continue to cheer you on. I don’t care that you’re not in first place. Watching you makes me feel like a kid again… like I’m back in first grade, hanging out at the ballpark. Only this time, I won’t bring my coloring book. 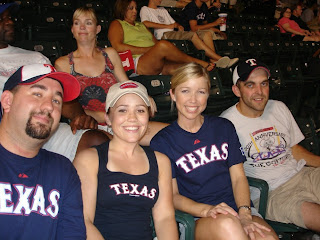 I went out to the Ballpark twice last week. That’s a photo of the Wednesday game (we won!). We look at bit disheveled because it was 105 degrees at the stadium.

And here’s a photo from a few weeks ago when I brought my mom and sister to the work suite. 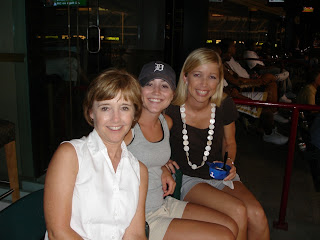 I go back next week to see ’em beat the Yankees again. Go Rangers!