Skip to content
This is my fourth year to do a year-in-review. It’s fun to look back on how my life has changed over these past few years, and I think 2010 may have been one filled with the most changes, and the MOSTS fun. For past years, feel free to check out 2007, 2008, and 2009.
Where did you begin 2010?
I went to a church party, but left a little before midnight, so I rang in the new year on the telephone with my sister. New Year’s Eve and New Year’s Day were both filled with dozens of media calls, and on January 2 I had a story on the front page of the paper (the best New Year’s gift a PR gal can have). 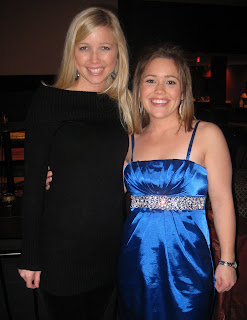 New Year’s Eve
What random cool things happened in 2010?
I went on a first date with a certain Mr. Right who ended up being the man of my dreams… six months later he asked me to marry him, and VERY soon we’ll officially be husband and wife! Other than that rather cool thing, I also went on a mission trip to Colombia, a beach trip to Florida, cooked a ton, hosted 30 people at my house for Easter, attended my first World Series game, watched my sister marry her best friend, bought a car, had my picture made with the governor, I got a new office with a window, and went on some amazing dates. Oh, and my house got hit by a tornado. 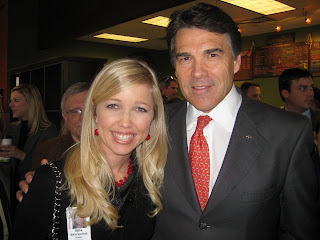 Books read in 2010?
Beth Moore’s So Long Insecurity
Key Principles of Biblical Fasting
The Essentials of Effective Prayer
Little Bee
The Help
Son of Hamas (one of my favorites of the year)
Laura Bush’s autobiography: Spoken from the Heart (this is what I’m reading now, only half-way finished)
Orange is the New Black (such a fun book!)
The Kite Runner
The Missionary Call
Forgiveness: Breaking the Power of the Past (maybe the best study I’ve ever taught… life changing)
Wuthering Heights
The Magician’s Nephew (a Narnia book)
The Lion, the Witch, & the Wardrobe (a Narnia book)
The Horse and his Boy (a Narnia book)
The Lost Symbol
South of Broad
Do anything embarrassing?
Right before Mr. Right asked me out, but when I knew he was kind of digging me, I had a very flirty conversation with him after church one night. I was feeling really good about myself… probably too good. As I was walking away, still looking at him as I said goodbye, I walked STRAIGHT into the visitor welcome desk. HARD.
What scripture did you study? (this is for me… fun to keep a record)
I did pretty deep studies of Isaiah, Jeremiah, Lamentations, Ezekiel, Daniel, Hosea, John, and all of Paul’s letters in the New Testament. I did an amazing study during Christmas on the Advent with Mr. Right (we’re going to make this a new family tradition) and taught Sunday School classes on forgiveness, prayer, and fasting. I had never studied much on fasting, let alone practiced it, and this year I loved learning about this often missed spiritual discipline. Even better, we had some much older and wiser people come speak and give us tips – it was so interesting to learn from them.
Did you know anybody who got married?
2010 was the year of the wedding. My other sister got married (Sarah & Philip), Sara & Dave, Amanda & Kevin, Amanda & James, my boss’ daughter, and two of Mr. Right’s closest friends. I was a bridesmaid twice and ALMOST a bride (I’ll make the 2011 list). 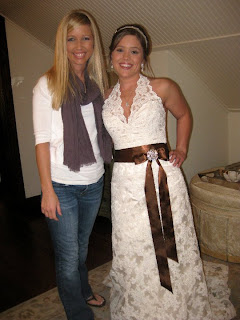 (With my sister @ her wedding)
Did you move anywhere?
Celebrating four years in my house this January. And getting a new roommate!
What sporting events did you attend?
I went to the last game of the Rangers World Series (we lost), and also to a Division Series playoff game against the Yankees. I went to Opening Day of the Rangers and saw a handful of their games through the summer. I also attended my favorite marathon, where I single-handedly handed out about 8,000 finisher shirts. Woah nelly, that was a crazy exhausting but very fun day. 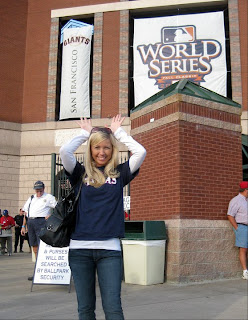 (at the World Series)

Mr. Right threw me a lovely birthday party at our favorite coffee shop (site of our first “sort of” date) and our two families and some friends came by for cake made by our wedding cake designer (my favorite). Since it was my 30th we did a lot of celebrating – I also went to dinner with some girlfriends, and my family and his family both had family dinners. 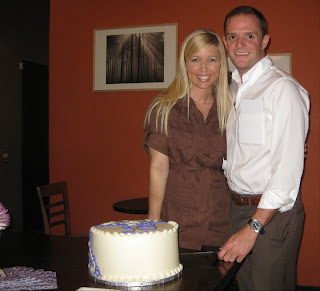 (at my 30th birthday)
What’s something you learned about yourself?
I learned that God really did have plans for me that were better than my own. I learned a lot about what it takes to love someone else in the way they want to be loved, and I got lot’s of great advice from married couples young and old about how to make a good marriage. Hopefully I can put those things into practice!
I also traveled to my first third-world country and learned so much about myself, my desire to serve the Lord, and my willingness to follow Him wherever He leads me. I learned a lot about people – we’re all the same, whether we live in the interior of Colombia or in the suburbs of DFW. It’s one of my favorite parts of traveling – realizing just how similar we all really are. 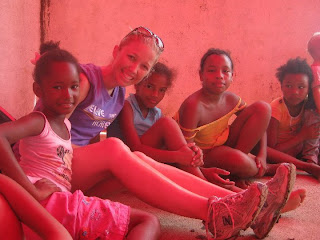 (in one of the barrios in Cartagena, Colombia)

Were you in school this year?

NO! For the first time since 2006… no school for me!
(NEW!) Where did you travel this year?
I got to add South America to my ever-growing list of places I’ve conquered. We took a week-long mission trip to Colombia, where I discovered that I love the people there and LOVE the food.
I also went to Destin, Florida with my family for a week, I went to “The Lake” with Mr. Right (aka – his family reunion), drove to Oklahoma for a wedding shower, took two trips to Midland, and squeezed in a quick road trip to Abilene. 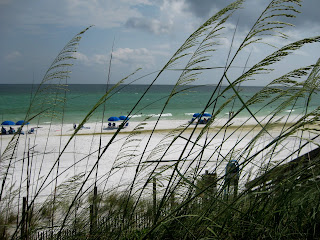 Destin, Florida
Any new additions to your family?
I got another new brother-in-law (Philip), plus an enormous family through Mr. Right. I am so blessed to be marrying into a solid, laid-back Christian family who has been absolutely welcoming. All my life I hoped I’d marry into a big family, and last year when I attended their family reunion with 100+ people (complete with an old-fashioned baptist hymn sing-along), I knew my prayers had been answered!
Favorite night out?
There were several. Our first date at my favorite Italian restaurant (Taverna) and then a walk through downtown and our favorite bookstore. Or the night we had a private tour of the Amon Carter Museum and then a walk through the museum grounds and a nightcap on the patio at Starbucks. Or maybe it was the night he took me to Babe’s for old-fashioned comfort food after a particularly stressful day, and then we walked out onto the dock overlooking the lake, dipped our feet in the water and watched the stars… for hours. Or maybe it was a simple evening of hanging out next to the glow of our Christmas tree listening to the crackle of a warm fire. There were MANY favorite nights this year. 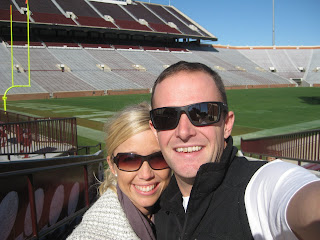 I think I’m going to get married. Maybe gain a new roommate–seems like a good idea. I also look forward to finding a new way to serve in our new ministry. There’s lot’s of new folks I don’t know very well, and that has to be remedied quickly. It’s time to start hosting dinner parties again. 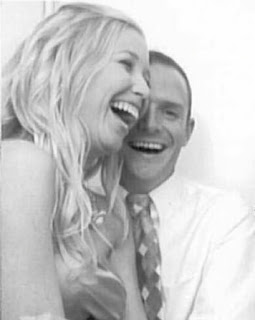 Where did you spend most of your time?
I spent a lot of time home in my kitchen, cooking dozens and dozens of dinners with Mr. Right. It’s kind of “our thing” and probably why he and I have had to hit the gym a bit harder lately. Worth it though. 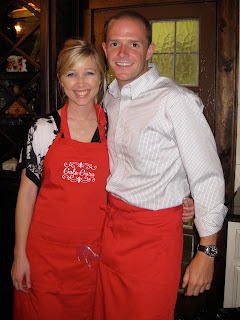 Do you have a new year’s resolution?
Get married.
Memorize 2 verses per month.
Read through the Bible chronologically.
What was your favorite purchase?
I didn’t purchase any of these things, but my new favorite things are (1) my engagement ring, (2) my new chaise lounge, (3) my Nook.
Did you get sick this year?
I was very healthy this year – what a blessing.
Start a new hobby?
No, but I picked my quilting and knitting back up. It seems to go in spurts, but I think this year I’ll have more time than ever before to work on projects, since Mr. Right is in grad school and will have lot’s of homework to keep him occupied. I also sorely neglected my writing (and this blog), but hope to remedy that in 2011. 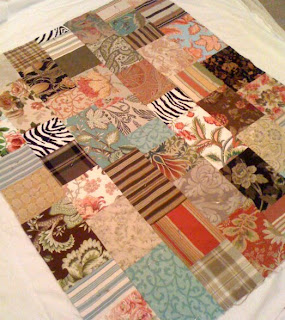 My latest quilt, made from scraps of material samples from Ethan Allen

What are you hoping and planning for in 2011?

I plan to learn how to be a good wife to Mr. Right. I plan to learn how to serve in a new ministry–this includes figuring out how to be a good minister’s wife (not the cookie-cutter stereotypical minister’s wife, but one who can help my man love on our people and reach out to folks who desperately need to know Christ’s love), but it also involves me finding my own “place” in a new ministry and different areas of the church than I’ve been for the past seven years. I plan to read through the Bible in a year, this time chronologically (I have been going in book order before). And I plan to log a lot of time on my knees asking God where he wants us… whether it’s here or in some far off land. Either way, I pray that we can both be faithful to the Lord and his calling for us in 2011, whatever that looks like. 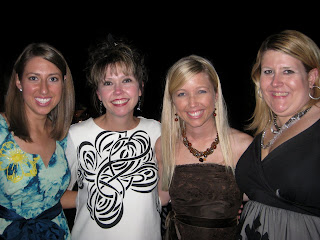 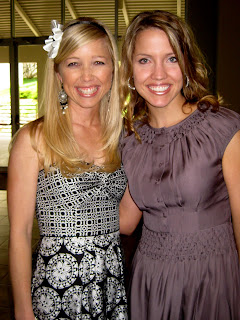 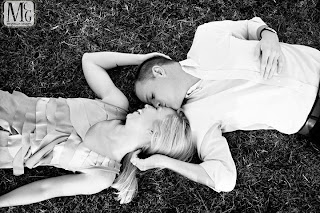